… with a Bachelor Degree in Visual Arts. So I’m going to break my traditional stance on recognizable photo’s of myself and do this: 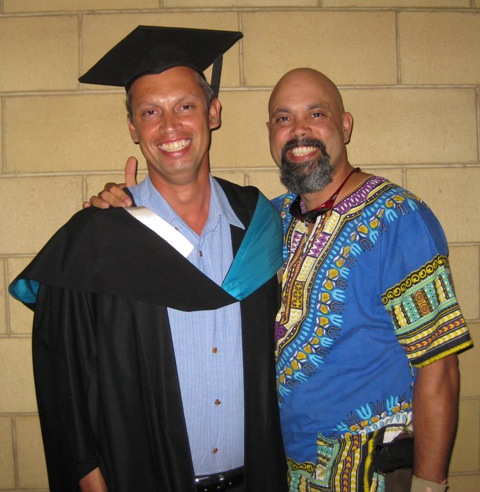 We did our best to find the the most attractive brick wall to stand in front of: 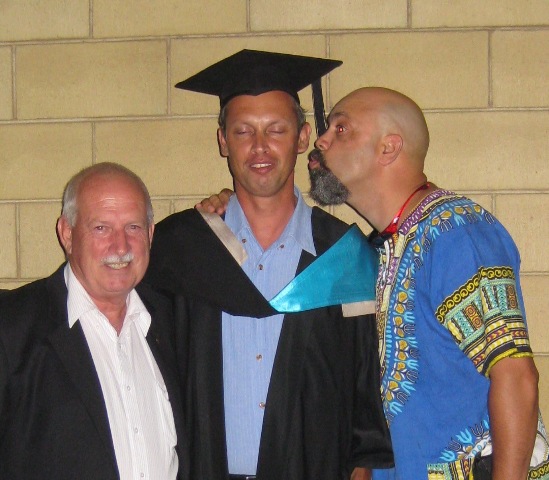 And then I go and ruin it… sigh! Our father (pictured) will tell me off later – both for acting the goat and for my taste in shirts. Our mother? Well, she was just shaking her head – putting up with our behaviour the way that only mother’s can. Mum stood up and clapped her congratulations loudly – throwing in the sort of verbal ‘encouragement’ that again – only mother’s can do – making my brother blush on the stage – at his very own graduation ceremony.

I have to tell you something. My brother is the only one in my family that has a Degree.  He’s  the only one of to graduate from University. My father went through teacher’s college and was teaching at the age of 19. He has also attended more Officer Training courses than I could poke a stick at. My mother was working as a nurse in a remote town by the time she too was 19. My youngest brother also qualified as  nurse – one year short of the Degree course – and me… well – I’ve never ‘graduated’ at all.

The job’s that most of family member’s do now are all quite extraordinary jobs that are about people. They’re complex, require planning and preparation, the building of relationships and the ability to do some pretty serious forward thinking. Their skills have been built and honed to a razor sharp edge – over many, many years of application in the field. They’re highly skilled jobs because we’re all completely committed to the things we do and the people we work for.

It’s been a different story for my bro there – he’s done mostly the hard work needed around us. That’s not to say he’s never been committed to it – just that he’s not had the opportunity to pursue other things he’d prefer to do. He’s laboured (still does in fact), been the floor sweeper, tyre changer, fridge stocker, hole digger and will-lift-heavy-things type of guy – all his life. And here he is… through sheer determination alone he’s pulled of his dream and graduated from University.

Last year, he found out he was severely dyslexic. I won’t tell your our age – suffice it to say that this should have been identified over 30 years ago – but it wasn’t. My brother has been doing all of these jobs for over 20 years, mostly because – at the heart of it all – he felt he was nothing but a dumb bugger. He almost didn’t graduate. In fact, they were going to fail him in his last year. up until that point – he had just been getting himself over the line each and every semester. His final year was the lowest I’d seen him – but with some help and a quick visit to someone who know’s a thing or two about learning disorders – he put in and finished off.

And here he is… graduated!

There’s a bundle of people who never invested in my brother when we were kids at school. They let him slide on through – told him not to have aspirations – smiled politely. My schooling was different for me for other reasons – it was difficult too – but ultimately we weren’t invested in all that much and that wasn’t that unusual then for ‘blackfella’ kids where we grew up. It was just how things were.

Look at him now.

We’re proud of you mate – you stuck it out and YOU realised your dream. That takes guts and determination.

People bring 'things' to me. Not necessarily PHYSICAL things as such - mostly just the loose bits and pieces floating around in their 'brain-box'. Sometimes, they also bring themselves - and THAT isn't anywhere near as simple as it sounds. I come here to pass some of this 'brain-box business' on to the ether world, and to empty my head. Besides folks - I love a good yarn - so come and join me!
View all posts by Belongum →
This entry was posted in Aboriginal, Art, Artist, Bachelor of Visual Art, Family, Graduate, Indigenous. Bookmark the permalink.